Our most sincere thanks we extend to Heatons Ireland for their ever present and generous support
Today we received sufficient items to meet some of the demands in Hungary, Romania, Tanzania, India, Bangladesh and Philippines.
A special mention of the manager, staff and team in Heatons Lurgan - enthusiastic assistance and a very positive contribution to our projects overseas. Wonderful ambassadors for their company.
Thank you
Don
Tags: Heatons, Ireland,

Thank you to British Airways whose incredible support allows us to dedicate so much of our time and finances to assisting our projects worldwide.
I had wanted to go to Bangladesh for many years, so having the opportunity to go this year was a dream come true. The many orphans that are there left every year after the annual floods, just keep growing in number.
Bangladesh may be one of the poorest countries in the world, but it is rich in history, and culture. The Bangladeshi people are a very kind and hospitable people. I was received by The Sacrifice Trust Dhaka, very warmly. I went to assess the situation with the street children, and the orphans of the cyclone.
On the second day I was there, I had opportunity to take 3 classes in a village school in the village of Riapora. The head teacher, let me take English classes, and the children were so receptive, as I sung, head shoulders, knees, and toes, over again, until, they all knew it off by heart. The teachers, and the children, had never seen a European before. Life is very basic out in the villages, and I was able once again to give out educational supplies, to the school.  I rode on a motorbike, to reach these villagers, and all the women and children came out to meet me. They were all happy to give me rice, and mango. There were many children, who were undernourished, and they looked very thin, so did the women. The sun beats down very hard, as the women go gleaning in the fields, for a handful of corn.
The number of street children , in Dhaka, was quite over whelming, but I was so happy to see the young men and women of Dhaka, eagerly ready to help them. There were so many poor and disabled children begging on the streets, it was heart wrenching. I didn t know where to start, but Philip Sakar and his team, showed me around Dhaka ,with every care and consideration for my welfare. Dhaka is a city with so many people, and like so many other Asian Cities it is bursting at the seams, as villagers flock to the city to look for ways to earn money. There is a shortage of rice, and people were queuing all day, just for a small kilo of rice.
In the two weeks I was there I covered a lot of the country. I was able to travel by local bus, and auto rickshaw, the 7 hours, up to the NE of Bangladesh, to the borders of Assam. Here it is India, and very famous for the tea plantations. The region was very rural, and paddy fields, dominated the horizon. I was able to see the flooded areas, and see the land still covered with blankets of water. This spoils the rice fields, and some times the rice shoots have to be uprooted, and replanted, a very backbreaking job, and time consuming. Roads were being resurfaced, with women carrying heavy loads of broken bricks on their heads, I cried for them. I saw children working in the fields, and in the factories.
There is 70% illiteracy in the whole country, as people can not afford education. The average life expectancy is 57, and people age very quickly, because of the harsh conditions.
We left money for food, and some medical supplies. The education packs were given out to two schools .
We are buying a little house for a lady, who is hosting 5 children. It’s in the village near Narsingdi, and will cost 3000 pounds. This is the start of our project, where we will set up a women’s care surgery, and house 5 orphans, and  we intend to work along with the local elders, to improve the sanitation, and get the clinic going. It’s a start, and where there’s a start, there has to be a middle and a finish, but we will continue to do very effort, to make a difference in the lives of these beautiful people.
We respect their cultures, and customs, as most of them are Muslims, but we want to cross these boundaries by showing our love, and compassion.
Thanks again to British Airways.
Melanie Price.

Dear Sabah and Don,
Among 10 children..... 5 got first division the top student in the class. 3 got second division...and the 2 got third position in the respective class.  Names are given in my next email.
One picture featuring Binita and Renu after the new paint on the building.  Rasmita and Anita in the newly completed hall ..so that new children as well as others can be used in near future... beds are ready but mattress...pillows...bed covers are needed. other pictures with those stuff bought for them...since they love play football 2 balls were bought.
Please find more pictures....
Thank you for your appreciation...and because of you I am able to continue such noble social deeds.  And will make more effort in doing in future too.
Love from Princesses
Piya
Tags: Piya, Nepal, Bath University,

Thanks to Sabah and Bath University.
Hi Don and Sabah,
Children really hunted for the outfit...I took them for shopping...buying clothes their own choice...this is the first they were given the full freedom of choice of their design, colour . They really happy doing that.  It took more than one our to finish selecting outfits with the full satisfaction.  The clothes they can use for few years to come before they grow up.  Lantern and torches, stationery items,,,,footballs were bought.
Meanwhile, all of them have passed the examination with record breaking result....the excellent performance.  Will send you the result detail tomorrow. Please find 3 pictures and few more tomorrow.
With love and hugs
from kids
Piya
Tags: Bath University, Piya, Nepal, Metta Center,

Vivienne captures the representatives of the Maasai people as they run the London Marathon to bring attention to their village. 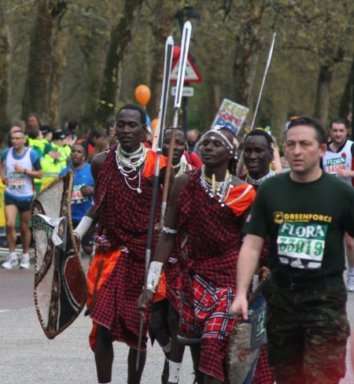 Celebrating the Successes of Women - Nigeria

European Classics Competition
Dear Don,
I hope you are well and haven't had too much snow.
Here are three links which might interest you - on the spur of the moment I decided to go to Italy with a friend to the Italian section of the CICERO competition - you know that France and Italy had to have their competitions last weekend because they could not manage the same date as Spain, Andorra and the UK.  The Italian competition was held in the town of Lodi, just outside Milan, and I was privileged to start both sections of the competition, in the beautiful Library of the town.  While the competition was going on I was given a guided tour of the school and spoke to a class of English students.
My Italian colleagues made me very welcome and here you can see some links to a Classics teachers' blog which has publicised my trip.  Please pass this news on to Dr. Federico for us.
http://blog.arlt.co.uk/blog/_archives/2008/4/1/3614937.html
http://blog.arlt.co.uk/blog/_archives/2008/4/1/3614666.html
http://blog.arlt.co.uk/blog/_archives/2008/4/1/3614713.html
Now I need to collate all the information and get the question papers ready for our competition on Friday 18th April.  We have had lots of entries and it should be a big event.  As we agreed when we spoke on the phone, the Hercules questions will include one common question as a European tie-breaker so that we can decide which school will get the batik.  We will translate the answer of the winner of the French/Italian contest and the Spanish/Andorran/UK contest and send them both to you (with some suggestions of what to consider for your judging) so that you can judge the overall winner.
All the best,
from Anne

School bags and miscellaneous items delivered safely to our friends in Tanzania.
A very successful trip by Melanie and Vivienne...... and our sincere thanks to Roch Valley for their continuous support and valuable commodities that they so generously donate. 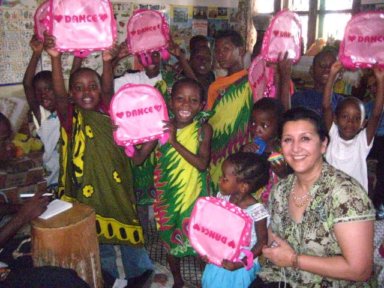 Thanks Don. Im already here in Dhaka. I ve received a warm welcome. I will be seeing the street kids, and going to the children's blind school. Il be visiting an orphanage, where the children are orphans from the annual cyclones and floods, that claim so many people every year. Im travelling the 5 hour bus journey up to the North, to see some very poor village children, and hopefully take some of the educational supplies, that I've bought
all the best
love Melanie
Tags: Dhaka, Bangladesh