Bulgaria - Snejana's logo for A Ray of Hope for August 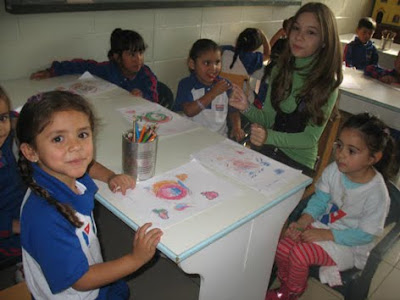 Paula Eduarda was in the Garden Uirapuru that is located in Guarulhos / SP, the Community Development Center ACM Uirapuru the day was full of laughter, friendly people who really devote themselves to others.
In the Garden Uirapuru has 185 young men, all very polite and even having some kind of dental problem they still have that beautiful smile.
Young people are happy that the ACM found them to offer further training and develop potential. 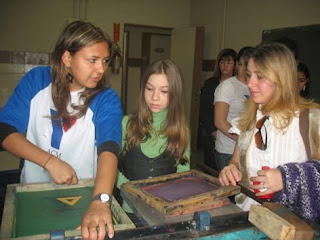 They are taught various vocational activities, such as carpentry, screen printing, sewing, crafts, tutoring.
In addition to physical activities and health monitoring.

Our project will be able to help these young people who are very close to the first job!

Congratulations to all and here I leave my deepest thanks to all employees and volunteers of this institution. 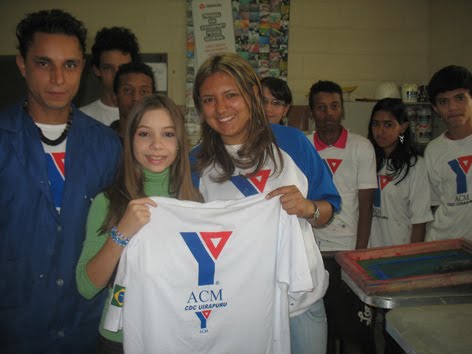 Nigeria - A Ray of Hope's "Hope" getting bigger. 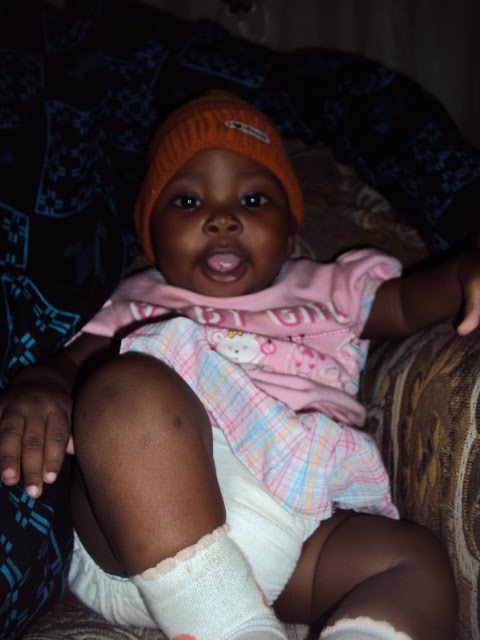 "Love means so much when shared" 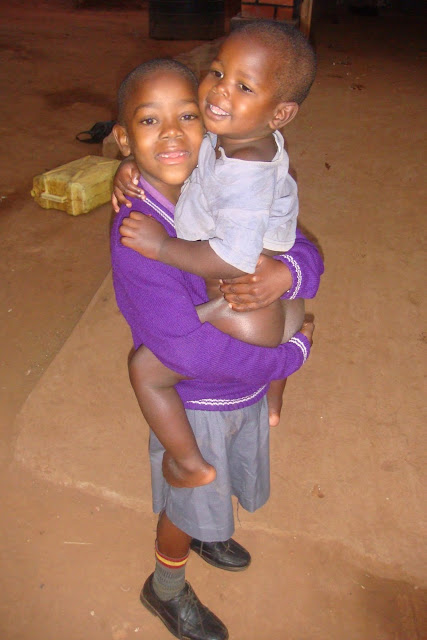 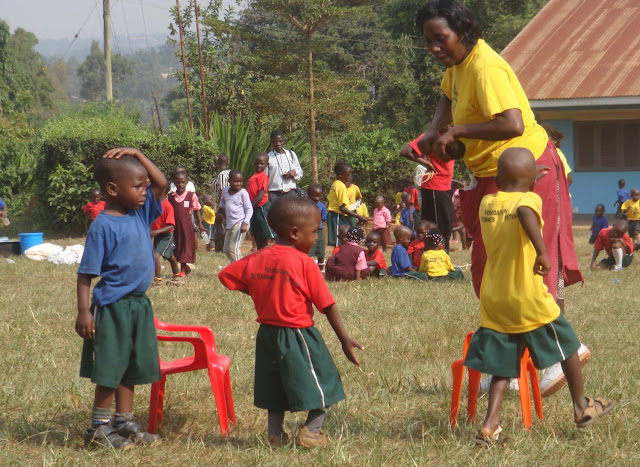 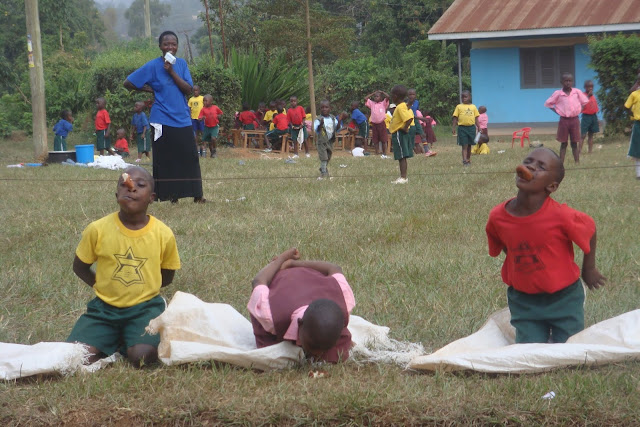 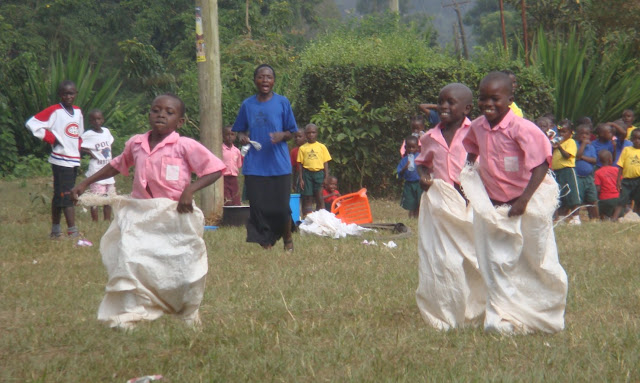 Statement on the terrorist attacks in Kampala on the 1.07.2010

I wish to extend my condolences to all Ugandans and especially the families of the victims of the bomb blasts that hit Kampala on the night of 11.07.2010. What befell our nation was so tragic. I hope that the nation will keep its strong heart and hope, as it has exhibited it so far, throughout the time of grief.

I wish to pass my thanks, first to the immediate families, relatives and friends of the victims for their composure despite the pain inflicted on them, and the country; to our police force and the medical teams who did whatever was within their power to save all the lives that were saved right at the scenes and at the hospitals; to all our leaders in their different capacities who have ensured that the country stays up and running, and are working relentlessly to ensure that such similar acts are averted; to the Somali community in Uganda, who, despite their status and condemnation from some individuals in the country, have done everything they possibly could to stand with the victims of the attacks; to friends; individuals, organizations and governments from allover the world who have stood with us in many different ways during this time of tragic.

These are acts of a few mad people, organized as Al Shabab, who claim to have carried them out in the name of Somalia and Islam. Their claims are baseless. Islam, like many other religions, has love as a central theme in its preaching. These extremists can not stand to represent the whole of Islam. Somalia , like almost every other country in Africa , has struggled to have a strong and running government, committed to prosperity of its land and people. Ugandans can not and shall not hold Somalia responsible for these terrorist acts. We will continue to consider Somalis as comrades in the search for peace and prosperity; people traveling the same road that most Africans have, or are traveling.

The people of Uganda have a history similar to that of Somalis. In the 70s and 80s, we were refugees in so many places around the world, seeking and hoping that our own country would be peaceful and prosperous. In the 70s, our own government, (government not an extremist group) attacked Tanzania , and even annexed part of it to Uganda . The Tanzanians strengthened their support to the Ugandan exiles, which led to the overthrow of Idi Amin, and finally culminated into the relative peace of the 90s and 20s in the country. It is a sad thing that we had to lose life for that peace, yet without the support of Tanzania , perhaps peace would have delayed. The memory of our own history makes it quite hard to deny Somalis our support.

As part of Africa, Uganda could not sit back and fold its hands as Somali extremists murdered the people of Somalia , moreover, a country whose proximity to us is so clear. The problems in Somalia have had a spillover effect in Uganda through refugees and an unstable security situation in our region. I am made to think that the success of the Uganda People’s Defense Forces (UPDF) in keeping peace in Somalia resulted in these attacks. The extremists want to terrorize and threaten us into giving up the peace mission in Somalia so they can freely exercise their control, murder and plunder over a people reduced into a vulnerable position. I would like to commend the UPDF for their successes and commitment to the peace of Somalia despite losing their own to terrorist fire.

Fellow citizens, peace in any part of Africa, as in any other part of the world, can be a contribution to peace in Uganda . If the presence of Uganda ’s peace forces in Somalia contributes, in any way, to the peace of that country, it is critical that we stay until we have helped bring it about. I would like to call upon the rest of Africa, and the world, to do more to bring peace to Somalia .

To the Somalis home and allover the world, there is more that you can do to bring about this peace. And to the extremists, there is more prosperity and happiness to be secured in the midst of peace than from plunder under cover of war.

I hope that the government and the people of Uganda will remain in a position to maintain their peace and still contribute to peace anywhere our involvement becomes necessary. I hope that soon Africa will be able to stop the necessity of war; that we will all be able to live in peace and prosperity despite our apparently insurmountable differences and hardships.

Like us all - I think Sandra gained more than those she wished to help and support. 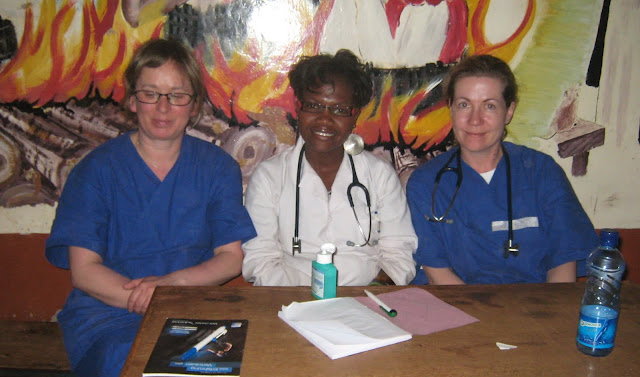 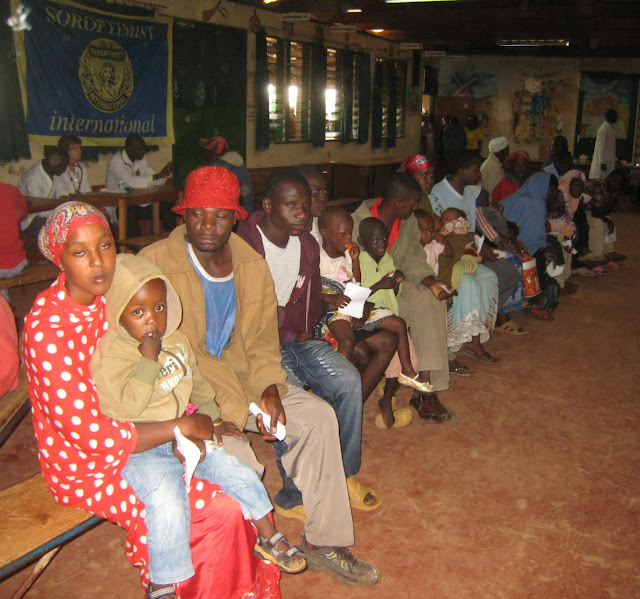 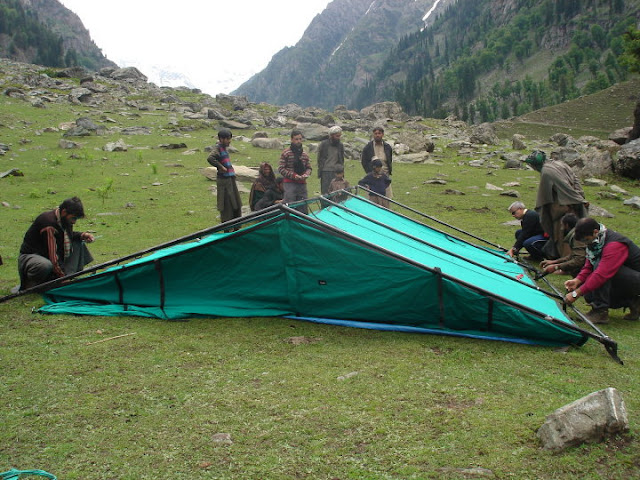 In Kashmir, India - 14,000 feet above sea level, there lives a community of beautiful people. They value education, and under the leadership of Bashir, education is promoted to the best of their ability. Befriended by Sujata and Team Deep Foundation the community share their culture and aspirations. Due to inclement weather it is not always possible to have a school in operation. However, with the wonderful support of David Tyler Trust, a purpose built structure was manufactured and delivered. All in A Ray of Hope, UNESCO Youth Ambassador for the Culture of Peace - delight in being part of an initiative that cares and shares. June, 2010. 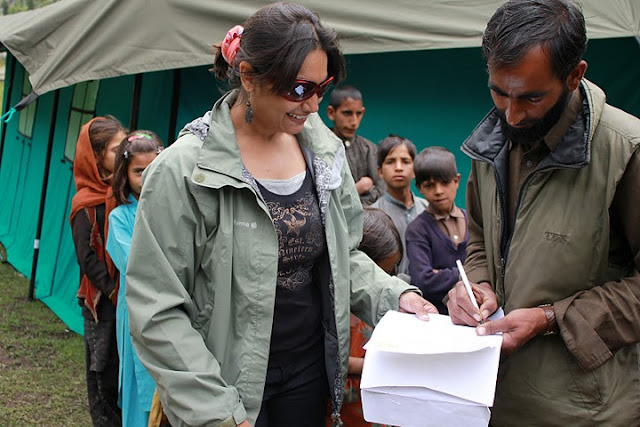 Click to see more photographs of the event and the wonderful people . http://www.unesco.8m.com/BKI/myalbum.html

Uganda - Pius on his Parliamentary Path 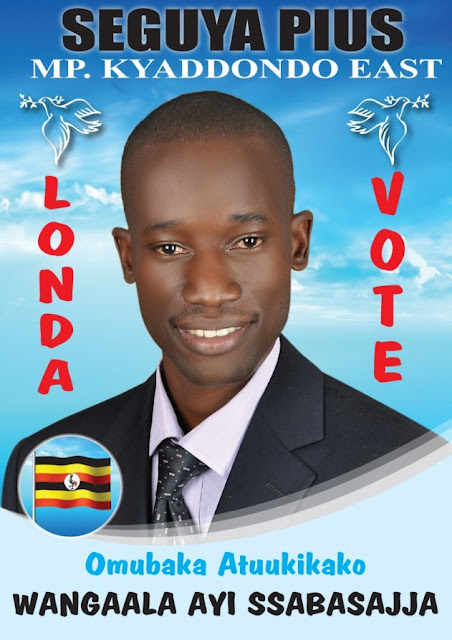 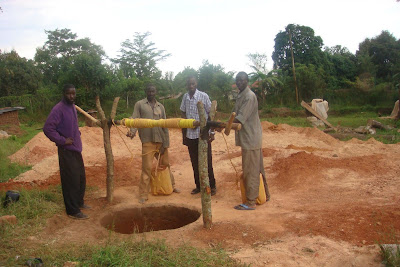 A deep water well has been dug and constructed at Spire High School. The men were able to go down more than 100 feet with their hoes, pickaxes, cut jerrycans and ropes to get the water. Spire High school is located on hill, the men excavated the earth with some concern of what if the water is not found down there?! But they were hopefull all the way, expressing their willingness to dig down up to 170 feet it that was required. They dug through soft soil and hard rock as well. When they reached about 90 feet, they had to start to construct with brick, cement and sand to protect the soft soil that they had gotten into from falling into the water, and also to protect themselves from being burried by that same soil.
Today, they have managed to construct a covering on the mouth of the well. It was last Saturday when they started July 3rd 2010 that they started to draw the water, still mixed with dirt, and the table still raising. It is clean water now. They are still drawing it with a rope. The students, too, will use the rope for some time. However, the school hopes that with time, an electric water pump will be installed to ease the work.
We was so moved by the love and hope with which Mr. Kibedi, head of the team, and all his team carried out the work. Some members of his team fell sick and the work stalled for about a week. But they were able to resume and complete. We can never thank them enough. Perhaps the knowledge of how much useful their contribution to the school and the nearby community would be kept them going.
We hope that communities will with time be able copy this model of deep water wells as they can be less costly in setting up and maintaining compared to boreholes and other water source. We will however have to observe the well over a period of time to see if any changes occur.
We want to warmly thank all the friends of Project Hope-Uganda; British Airways, A Ray of Hope(who is also both mother and father), St. Marks Nursery and Primary School, Fielding Primary School, etc, for this blessing of water to a school and community who have had to travel long distances to draw unsafe water from ponds.
Also, Manyangwa Modern Primary School got electrified. I will take some pictures when I visit them next.
Love and blessings, 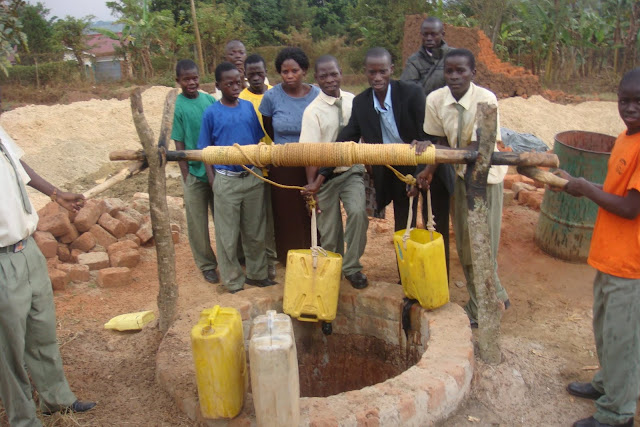 Supplies arrive safely with new friends - well done to Jenny and her team. 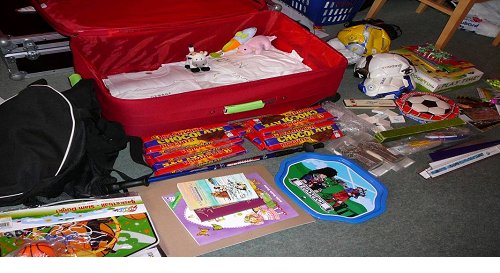 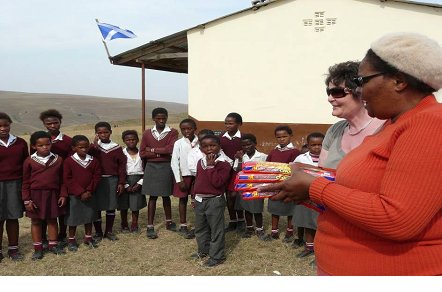 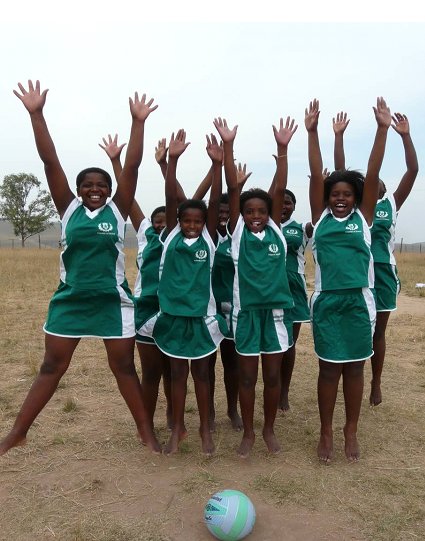 Uganda - Good luck to Seguya as he begins his parliamentary campaign trail. 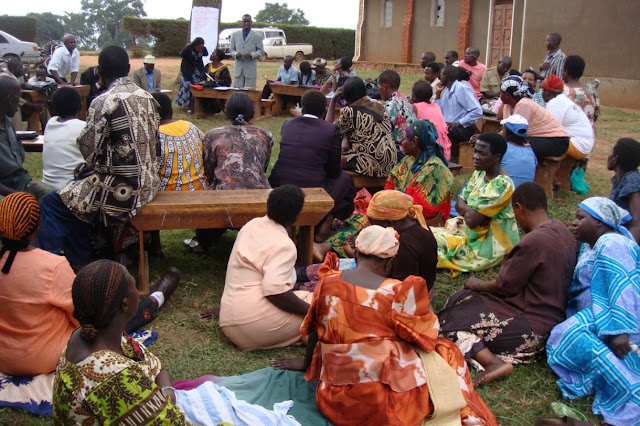 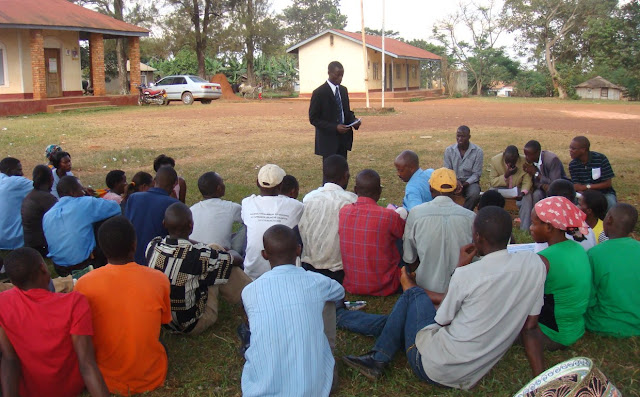 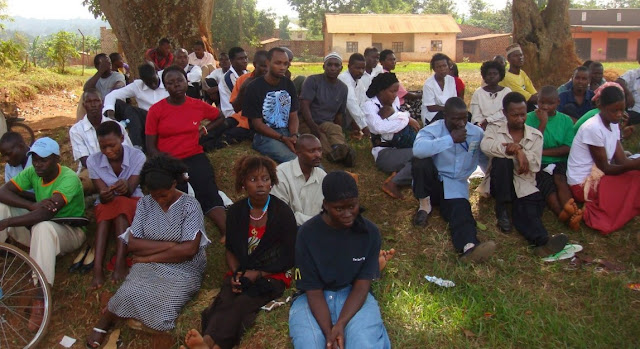 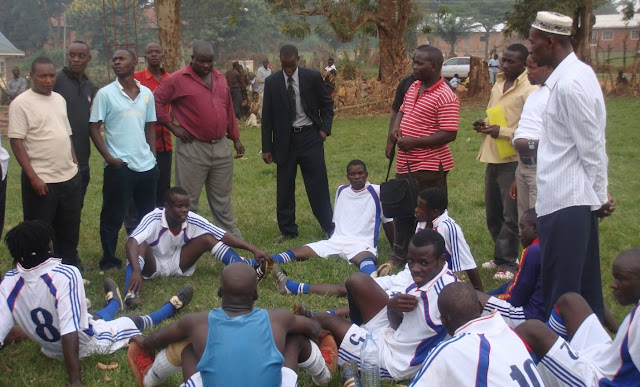