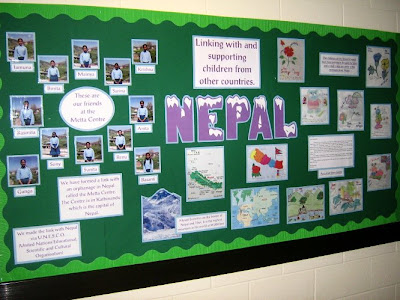 I have received a written report from the library about the pigs:
- In all, 9 piglets were bought and given to 9 individuals, two of these were high-breed males to help provide better breeds in the future.
- Three of the piglets grew up and gave birth to babies, and with the arrangement 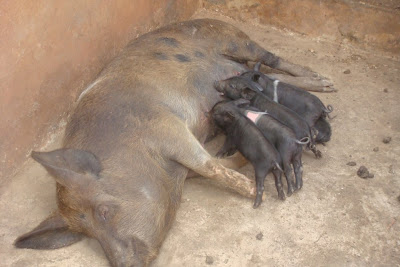 in place, of passing a piglet to another farmer, three new farmers received piglets.
- Two farmers among the first 9 sold their piglets once they became unable to raise them, they returned the money to the librarians who facilitated purchases of two replacements which were passed to two other farmers.
- 2 piglets of the first group died due to insufficient care
- One farmer had her piglet stolen, but she was able to find money and replaced
This suggests that we have 5 female piglets ‘at the library’ that we expect to get babies to pass to 5 new farmers.
Three farmers at my side of the village received piglets, they all did well and three new farmers were brought onboard. In all, we had a start off of 12 piglets, 12 farmers, lost two, and have seen 6 new farmers come onboard.

Initial No. Received 12
Losses from the Initial 2
Pass-on from initial 6
Expectation for the next round 8 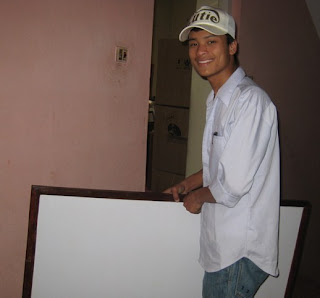 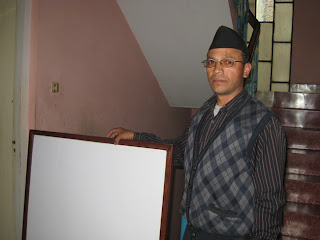 Namaste Don,Here are two pictures of the white board distribution to two differentschool. The boards were received by the principle of Bhimeshwor Primary School Mr. Ram Hari Rayamajhi.Have a good day!Best regards,Krishna

Tanzania - Vivi visits her friends and the US Navy also visit to help.

South Africa from Jenny in Scotland 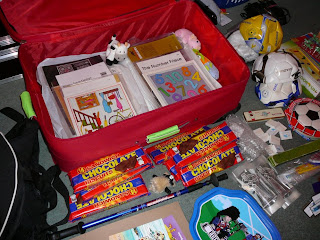 Good morning from a very foggy Edinburgh! Here's a photo of my packing for the daily journal. "On Wednesday evening, the 8 of us ,who are going to work in Goboti, met and divided up all the gifts for the school and young children in Goboti. This is my packing, with some of the School Posters from Pictorial Charts Ltd (the teachers won't believe their eyes!), biscuits and footballs, all thanks to A Ray of Hope. They will, indeed, bring A Ray of hope to Goboti Village. I will have a big story to tell the villagers about the real Ray of Hope! Thank you!" On with the work - still lots to do!
Love from Jenny