Napp'ae (Exchanging Valuables) Before the wedding, the groom's family sent presents to the bride and her family in a box called a Ham. Additionally, the Hamjinabi (person who 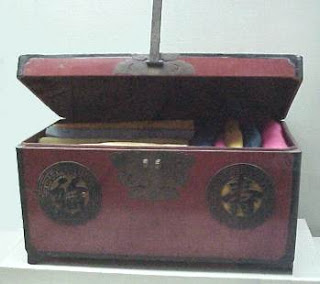 delivered the Ham) and a small group of close friends of the groom also took a pot of Bongch'i Deok (red bean rice cake) from the groom's family. The bride's family would have a small party for the group, offering them food and drink for their efforts. The ceremony of delivering the Ham has evolved into a major event for friends of the groom, with the bearers "selling" the contents of Ham to the bride's parents. The Ham usually contained 3 items. The Honseo (marriage paper), wrapped in black silk, specified the name of the sender and the purpose (marriage) of sending. It symbolized the dedication of the wife to only one husband. The wife was to keep this document with her forever, having it buried with her when she died. Ch'aedan was a collection of red and blue fabrics, used to make clothing. The blue fabrics were wrapped with red threads, while the red fabrics were wrapped with blue threads. The two colors represented the philosophy of Eum/Yang (Yin/Yang). The Honsu was a collection of other valuables for the bride from the groom's parents.
(Wedding Box, Ham) Wedding boxes, bridal chests and rice chests where often elaborated with beautiful Chinese characters which can be found on prominent places and give each item a special touch.
Wooden Goose/Wedding Ducks (Kireogi) 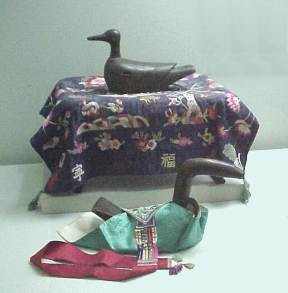 A pair of wild geese made from wood represent the new husband and wife. In the Jeonanrye part of the marriage ceremony, the groom gives a single kireogi to his mother-in-law. The geese symbolize several virtues that the couple should follow in their married life:
Wild geese keep the same partner for life. Even of one dies, the other will not seek a new partner for the rest of his or her life.
Wild geese understand hierarchy and order. Even when flying, they maintain structure and harmony. Wild geese have the nature to leave their existance wherever they go. People should leave a great legacy for their descendants when they leave this world.
In a traditional Korean wedding which was held in the bride's house, a bridegroom's first act after arriving at the bride's house was to offer a wooden goose to the bride's family as a token of lifelong fidelity which was the beginning of the wedding ceremony. Still nowadays, wooden ducks are nice wedding presents appreciated not only in Korea but also in the western world.

Gyobaerye (Bowing) This often marked the first time that the bride and groom saw each other. The groom and bride each had two attendants who helped them throughout the ceremony. First, the groom walked to the east side of the wedding table. 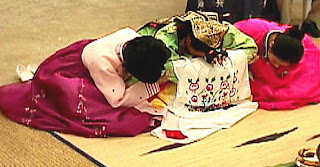 Then the bride walked to the west end. The groom's helpers spread a carpet or mat out for the groom, then the bride's helpers did the same for the bride. The bride and groom then faced each other across the wedding table. The helpers washed the hands of the bride and groom. The washing of their hands symbolized cleansing themsleves for the ceremony. With the aid of her helpers, the bride bowed twice to the groom. With the aid of his helpers, the groom bowed back once to the bride. The bride then bowed two more times to the groom, who bowed back once more. They finished by kneeling down and facing each other. The bowing represented the promise of commitment to each other.